DOMENC HOUSE is a family Hotel Apartments & Spa has rooms that are fully equipped for huspedes find all the amenities. We have a social salon television, computer tables, library and games, a garden with barbecue, sun loungers.

five apartments of varying capacities February 2 and April 3 seater seats with possibility of extension. Estn fully equipped and they are all very sunny.

Our Restaurant has a tradition of several generations of the family serving our huspedes Domenc, we have daily service men weekends and a top menu with a variety of dishes proposed products specializing in the Pyrenees with a careful elaboraciny modern day and age, without sacrificing the tradition inherited from our elders.

We as a small service spa with sauna, Turkish bath, tanning relajacin, Scottish shower, waterfall and sphlas showers and massage room with a varied menu where we use Alchemy products 100% natural.

We find in the village of RNA in the region of La Ribagorza (Huesca), in the Pyrenees Aragons and bordering Cataluña. Historical town declared a national interest skating in the July 1, 1982. For the beauty of his helmet medieval Historical trace, In addition is known for the importance of dinosaur fossils deposits found nearby. Also the remains arquolgicos (CASTILLO, dolmens).

CASA DOMENC is a Hotel Apartments located in the town of AREN or ARENY de NOGUERA.

It has fully equipped rooms for guests to find all the comforts. We have a social room with television, computer, tables, library and games, a garden with barbecue, loungers for sunbathing.

You will find us in the town of ARÉN, in the region of La Ribagorza (Huesca), in the Aragonese Pyrenees, already bordering Catalonia. Town declared a Historic-Artistic Site of national interest on July 1, 1982. Due to the beauty of its historic center with medieval traces, it is also known for the importance of the fossil dinosaur sites found in its vicinity. Also for the archaeological remains.

20 MINUTES FROM THE PARKING OF LA MASIETA, CONGOST DE MONTREBEI. 40 KM FROM THE BOI VALLEY. 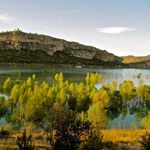 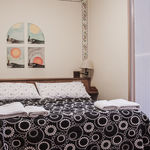